How To Grow Tomatoes In Hay Bales?

Growing mediums are typically soil-based. But, there has been a rise in popularity for growing crops in non-soil based mediums. But, can you grow tomatoes in a bale of hay (or straw)? Of course! This guide (and a video in the text below) will show you exactly how to grow tomatoes in hay bales.

How To Grow Tomatoes In Hay Bales 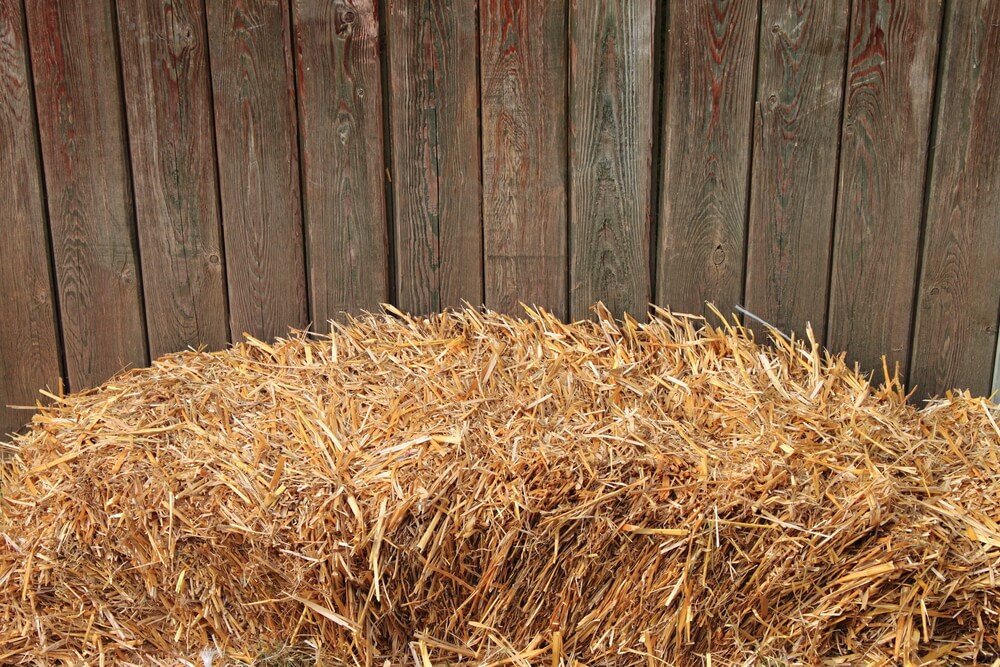 Unfortunately, growing tomatoes in a bale of hay aren’t as simple as planting it and reaping the rewards. The bales must be conditioned before being usable as a garden medium.

First, you have to choose a good location for the hay bale. Once you place it and start to condition it for planting, it will be much too heavy to move. Pick a location that gets upwards of 6 hours of sunlight per day.

Put a layer of cardboard or a couple of layers of paper under the location of the hay bale to stop weeds from growing into the bale itself. Place the hay bale on top of the weed barrier.

Now, how do you prepare hay bales for planting?

Well, conditioning the hay bale will allow for optimal growing conditions. It’ll require daily watering and a high-quality organic fertilizer that is rich in nitrogen every other day. Composted chicken manure, blood meal, and feather meal all work well.

Here is the schedule:

This schedule puts the composting process into overdrive and makes the hay bale heat up quickly and then cool down to be optimal for planting. The composting will continue through the growing season and help feed the tomatoes.

While tomatoes can be grown from seed, they do best when transplanted as established seedlings. There are 3 types of tomatoes that you can plant:

Determinate and dwarf varieties will be better suited for hay bale gardening. While non-determinant can thrive in a hay bale, they require high trellises that may be harder to secure in or around the bale.

Determinate and dwarf varieties will work well with a simple cage that is easily attached to a post that is secured through the hay bale.

3. Transplanting To The Hay Bale

To transplant a seedling into the hay bale, dig a little trench in the bale. You can fill this trench with aged compost to help feed the plants and provide a stable medium for young roots.

Then, get your seedling out of its container and place in it the trench and cover the root area to create a small mound.

Two tomatoes plants do well in a hay bale, although you can stick with one if you choose a larger growing variety.

Once transplanted, thoroughly water the plant to soak the roots and help form a bond between the roots and the compost in the trenches.

Growing your tomatoes in a hay bale is essentially the same as growing in soil. There are quite a few benefits and one large drawback.

The benefits of growing tomatoes in a hay bale are:

The one drawback of hay bale gardening is that the hay bale will dry out much faster. This means that irrigation will be the main focus throughout the growing season.

Installing drip irrigation or a soaker hose running on top of the hay bale is a good way to ensure proper watering. You may have to water every day if the days are hot and sunny.

With all of this extra watering, nutrients will leach out of the hay bales quickly. Regularly applying a balanced organic fertilizer once a week is the best way to avoid nutrient deficiencies.

The growing season won’t be disrupted by hay bale gardening. Time to maturity and yield should be just as they should be!

Choosing determinant and dwarf varieties mean the tomato plants will put off their large yield and then die. Once they die, you can place both the plants and the hay bale in the compost pile.

Or, you can leave the composting hay bale in place and let it finish to create high-quality soil for an in-ground bed in future growing seasons.

Read also this guide to make sure birds do not spoil your harvest.

How Do You Fertilize A Straw Bale Garden?

Sprinkling an organic fertilizer on top of the hay bale and watering it in works well. Or, you can use a water-soluble fertilizer and water it in that way. Regular fertilizing is required for optimal growth and crop yields.

How Often Do You Water A Straw Bale Garden?

You have to water more often than a soil-based container. You may have to water every day. Monitoring the moisture levels and the plant health will tell you when you need to water. Hot and sunny locations will make irrigation needs higher.

How Long Does A Straw Bale Garden Last?

Most straw bale gardens will only last one growing season. Some may last for two growing seasons if the crops aren’t long-growing crops. After that, they will be composted and providing high-quality nutrients to the soil below or providing more mass to your compost piles.

Hay bale gardening is a great way to escape heavy weed, pest, and disease pressure. You don’t have to worry about poor soil quality. By the end of the season, you have gotten a great tomato harvest and created high-quality compost to use for other crops!

If you want to learn about other growing methods, check my guide about growing tomatoes indoors.

2 thoughts on “How To Grow Tomatoes In Hay Bales?”