Why Do Shepherds Put Oil On Sheep?

Shepherds have been putting oil on sheep since before biblical times. In fact, the 23rd Psalm is actually an extended metaphor comparing the sheep-keeping techniques of the times to the shepherding actions of Christ. The shepherd cares for all of the needs of the sheep. He takes the sheep to green pastures and quiet waters. He guides the sheep along safe paths and leads them through darkness and danger, guiding and defending them with His rod and staff. He feeds, trims their hooves, and cares for the sheep even when life threatening conditions such as freezing cold and drought (enemies) are present. He anoints the sheeps’ heads with oil.

But why do shepherds put oil on sheep? Read on to learn more.

Reasons To Anoint Sheep With Oil 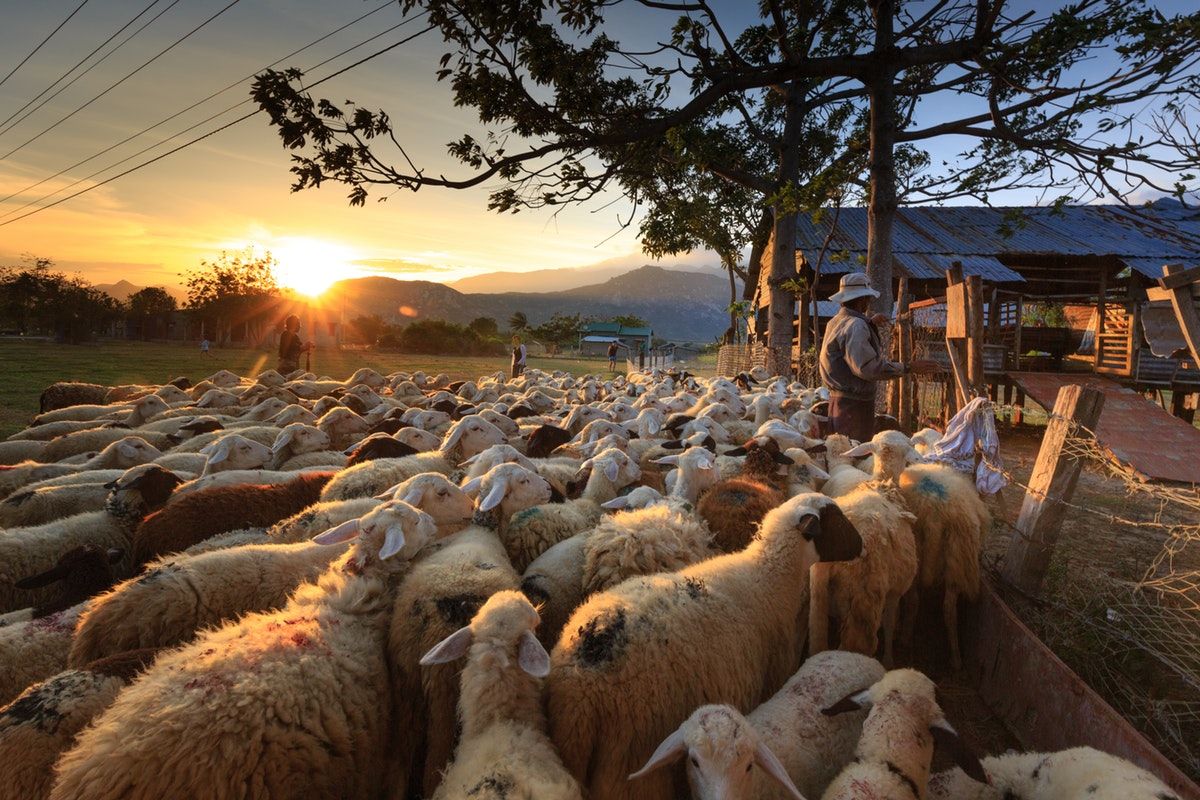 There are actually very good reasons to anoint sheep with oil in many seasons of the year. Here are three top reasons to put oil on your sheep:

Autumn is breeding time for sheep, and the rams of flocks run on pasture may fight for the favor of the ewes by butting one another, head-on, with great force. This can cause serious injury or even death.

For this reason, old-time shepherds would often grease the rams’ horns and heads heavily in hopes they would slip on impact.

In olden times, heavy cooking grease was used. In more modern times, axle grease was sometimes used. All-in-all, the best way to prevent rutting rams from injuring one another is to keep them apart.

In the summertime, flies bother sheep. The worst are nose flies which buzz around a sheep’s head trying to lay eggs in the sheep’s nose. The hovering flies can cause sheep to panic and run wildly. This sort of activity can ruin their meat and milk, and may result in injury or death.

If the fly is successful, in a few days, larvae will hatch and burrow into the soft flesh of the sheep’s nasal passages. This causes irritation, inflammation and infection.

The pain will cause the sheep to rub its head on the ground, thrash through underbrush and even bang its head on tree trunks attempting to get rid of the intruders.

In severe cases, a sheep may kill itself trying to get away from the pain. If the sheep manages to survive, the infection caused by the larvae can cause it to go blind. Because of the seriousness of the problems caused by nose flies, shepherds must be extremely attentive.

In biblical times, they would watch for the first indication of nose flies and then apply a natural repellent made of olive oil and strongly scented, medicinal essential oils.

Another condition that is very troublesome in the summertime is a contagious disease known as scab. This is actually a parasitic condition caused by a mite called Psoroptes ovis that is spread from sheep to sheep through friendly head-butting and rubbing.

Applying a thick coat of medicinal oil to the sheeps’ heads was believed to kill the parasites and prevent their spread.

Today this very serious infestation is treated with a full body (plunge) dip of either oganophosphate Diazinon or an injection of ivermectin, doramectin or moxidectin.

TIP: This is a good value pack of Ivermectin Sheep Drench 8 oz.

Oil concoctions can have some effectiveness as a repellent for flying insects, but if your sheep has scab, you should call your vet and get professional help.

If you want to try oils as a fly repellent, a modern day equivalent of the types of oils used by biblical shepherds can be made by combining equal amounts of linseed oil, sulfur and tar.

If you don’t have access to tar or prefer not to use such messy ingredients, you may wish to give this oil based fly repellent/skin conditioning mixture a try.

A third of a teaspoon each of these essential oils:

Shake the mixture gently to combine the ingredients. Spray your sheep (or other livestock) all over a couple of times a day during the fly season. You may wish to soak a cloth in the mixture to apply it more thoroughly to the face, ears and head.

26 thoughts on “Why Do Shepherds Put Oil On Sheep?”