What Is The Difference Between A Duck And A Goose?

Ducks and geese are waterfowl belonging to the bird family, Anatidae. Altogether, there are about ninety different species of ducks in the world and as many species of geese. Both types of waterfowl share some similar features, but they also differ in many ways. In this article, we will explore the similarities and differences between ducks and geese. Read on to learn more.

Where Do Ducks And Geese Live?

Ducks and geese naturally live around large bodies of water, such as ponds, lakes and the ocean. As human populations grow, both ducks and geese find their natural habitats shrinking and/or becoming uninhabitable.

Uncontrolled hunting threatens populations of both ducks and geese in the wild.

Some species of ducks and geese migrate seasonally to avoid cold weather. Some stay put.

How Do Ducks And Geese Look? 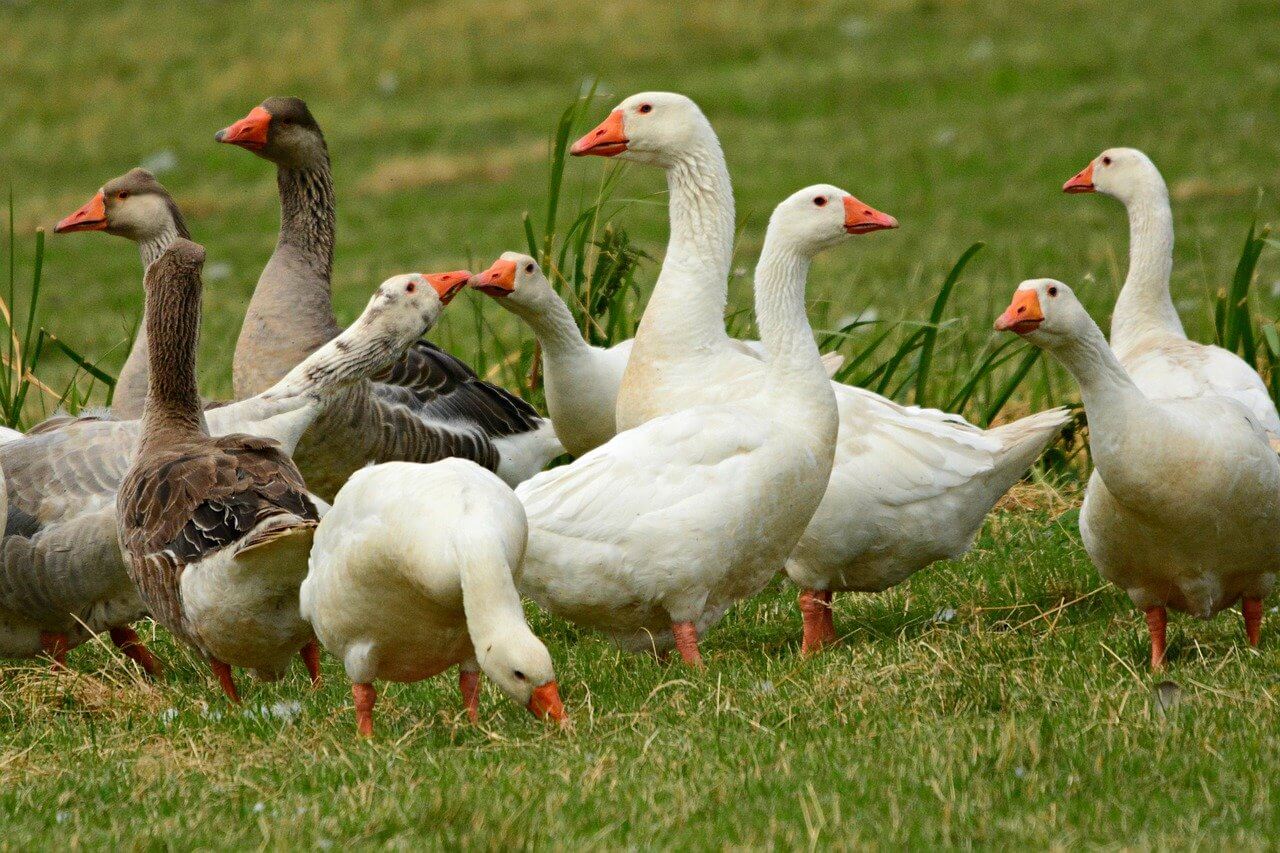 Geese have much longer necks than ducks. In fact, a goose has between seventeen and twenty-four neck vertebrae, but a duck typically has less than a dozen.

All ducks and geese have webbed feet to help them navigate easily in water. The webbing on a goose’s foot is typically a bit more noticeable than that on a duck’s foot.

Ducks have wide, flat bills, and their nostrils are placed high on the bill. A goose’s bill is shorter, pointier and notched. Geese have nostrils placed low on the bill.

For the most part, ducks are more colorful than geese, which tend to be black, gray or tan, but there are exceptions to the rule with both types of birds. Additionally, geese and ducks may be multicolored.

Read also: Can Ducks And Chickens Live Together?

How Do Ducks And Geese Eat?

There are three groupings of ducks:

Ducks eat plants, insects, reptiles, amphibians, fish, slugs, snails, worms and just about anything else they can fit in their flat, scoop-like bills.

Geese are vegetarians for the most part. Their bills are designed for grazing on plants, grasses and shrubs. 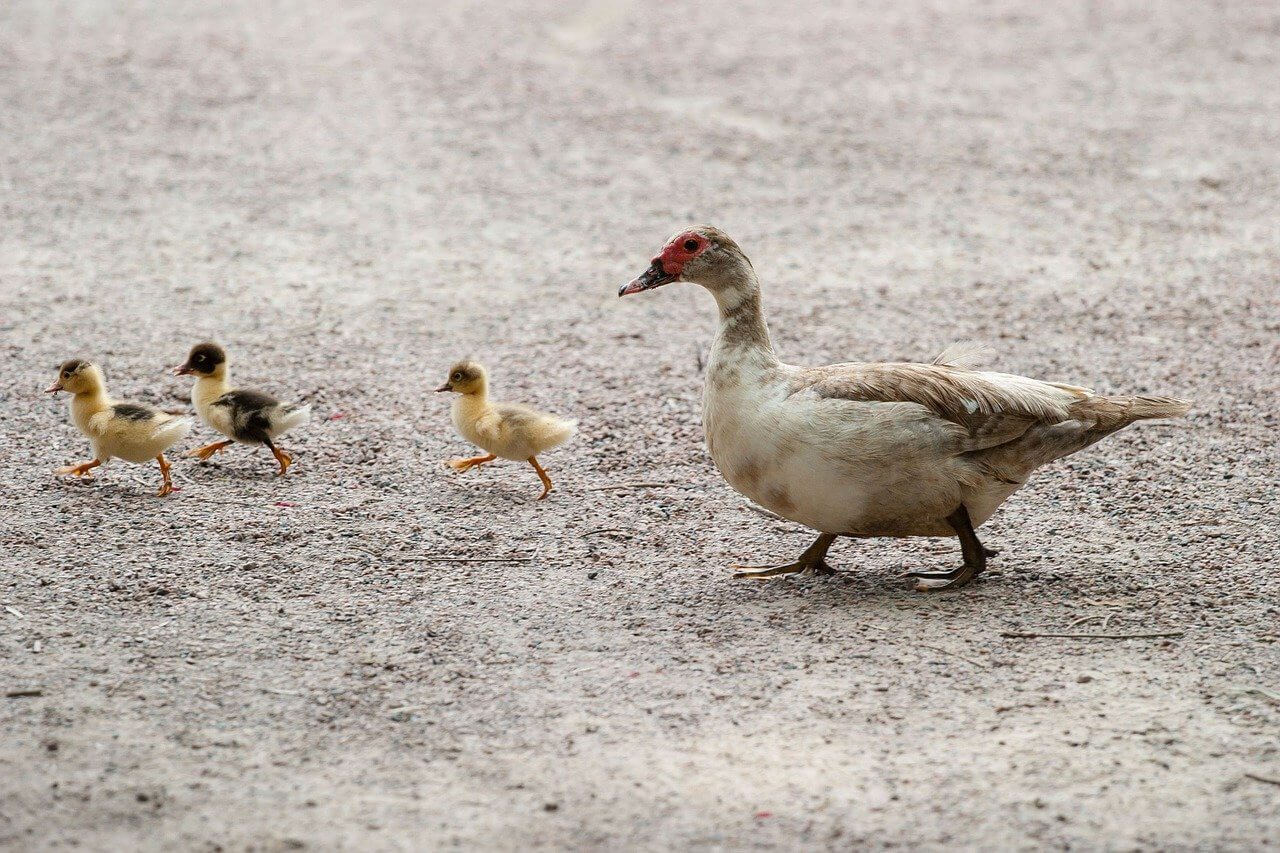 Geese and ducks sound different. All breeds of ducks quack, some more than others. Geese, on the other hand, honk.

You can hear them honking in the sky as they fly along in a V formation, and their honking makes them excellent watch-animals, alerting their people to the presence of strangers and predators.

How Do Ducks And Geese Mate And Raise Young?

When it comes to choosing a mate, geese tend to mate for life and may grieve to death at the loss of a mate. Ducks mate for a season and then may choose a new mate the next year if one is available.

Duck parents do not share the care of the eggs and the ducklings. Instead, the hen takes on most of these duties. Geese, on the other hand, share parenting chores by taking turns sitting on the eggs and sharing care of the goslings.

Although ducks and geese like to pair off for mating and reproduction, they are sociable and gregarious and like to live in a flock.

Baby ducklings and goslings will imprint on the first living thing they see when they hatch. This is usually the mother or father, but if the imprint target is a human or another animal, this can lead to problems.

What Are Ducks And Geese Good For?

On the farm, ducks are typically kept for egg and meat production and as a source of down for stuffing jackets, pillows and the like.

Geese can be kept for meat production, but they are more likely to be kept as a natural form of weed control and grass trimming as well as a noisy and natural alarm system.

Can Ducks And Geese Defend Themselves?

While ducks are natural prey for small predators, such as foxes, cats, raccoons, skunks and coyotes, geese will tend to run these predators off.

Geese are big and tough and quite defensive, if not downright aggressive.

Are Ducks And Geese Friendly?

Ducks are naturally friendlier and more comical than geese, which is why you are far more likely to see ducks in cartoons. Geese are considered both noble and cantankerous and they are often cast as characters in fables and fairy tales.

Although ducks are funnier and cuter than geese, geese actually have more complex and interesting personalities. A goose keeper can make friends with a goose in much the same way one would with a dog. Geese become defensive of their keepers, but ducks do not.

1 thought on “What Is The Difference Between A Duck And A Goose?”